Technovation
5S – The Japanese Mantra to a Successful Organisation

5S – The Japanese Mantra to a Successful Organisation 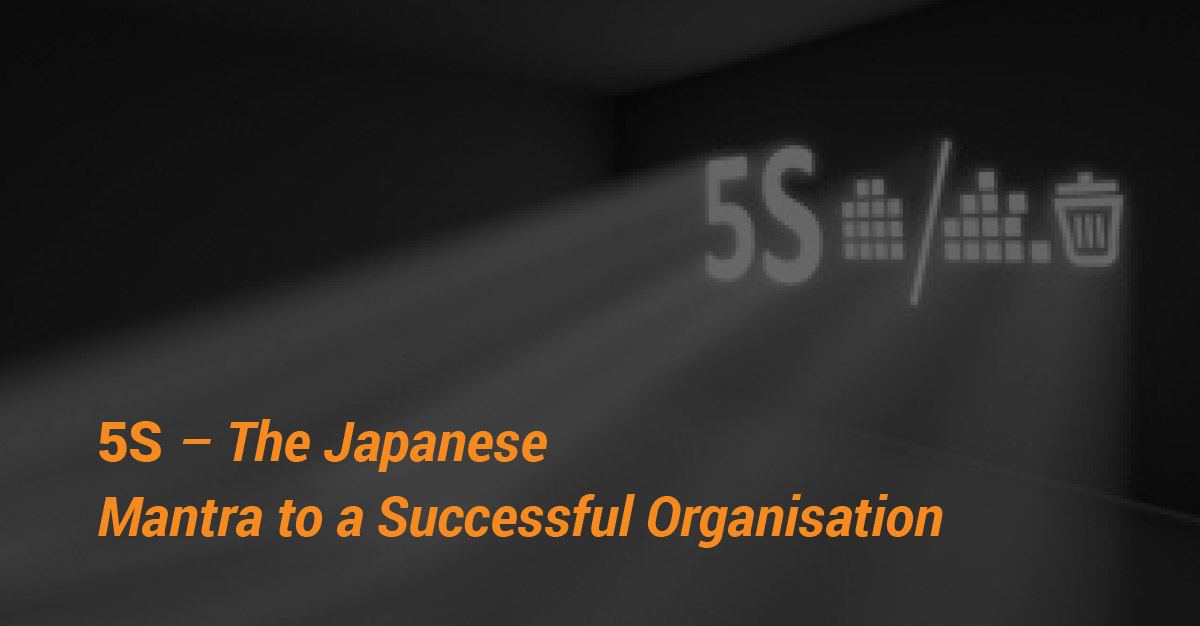 At the core of any successful manufacturing unit are two important, but often overlooked aspects: elimination of waste and workplace effciency. If left unchecked, both of these can cause large amounts of hindrances in the assembly line. While the effciency of a workplace directly reflects how well the company is doing, the elimination of waste is an integral step for the smooth flow of work on the floor of the factory.

In order to generalise this, the Japanese auto-giant Toyota Industries (which was known as Toyoda Automatic Loom Works) came up with a unique methodology post the Second World War, which was called the Toyota Production System. Although initially it was a closely guarded secret by the industry giant, the late 1980s saw the introduction of the idea of five ideas or the pillars of JIT (Just In Time) manufacturing, which would then go on to become the 5S method and get adopted by companies worldwide.

The 5S methodology is simply a systematic laid out plan to visually manage the entire manufacturing unit. The term 5S stands for five terms, all of which start with the letter ‘S’. The original Japanese terms are: Seiri, Seiton, Seiso, Seiketsu, and Shitsuke. When the Americans adopted this method, they translated the terms to: Sort, Set in order, Shine, Standardize and Sustain respectively. The steps must be executed in this order with a proper plan in place to perform any tasks related to this method.

1. Seiri (Sort) – This is the first step in the process. The goal of this step is to maintain tidiness at and around the workplace. This is done by three simple steps. The first one is to take a close look at all the items present at the workplace. This is followed up by identifying what items and tools are required and separating them from the rest. The last step is to return the unrequired items to their original place, which may be their toolboxes or other stations. In case there are any items which are of unknown ownership, the standard process is to use the red-tag, which mentions where and when the item was found. The items which are red-tagged are then collected and placed in the lost and found location. Similarly, if in case any tool is missing, look for it in the lost and found location.

2. Seiton (Set) – The aim of the second step is to organize the workplace. Items and tools are usually cluttered all around, and this hampers the smooth workflow as time is spent in searching for the correct item. In order to do this, a map is made which outlines the workplace. Specific places for tools, spare parts and samples are marked, which are to be followed. Based on the need, there are three ways to approach this step: drawing the map and following it; arranging the workplace and mapping it; and mapping as you work. Once this is done, it is communicated to every concerned employee.

3. Seiso (Shine) – The third step is to clean the workplace after the first to steps are completed. This is done due to the fact that even though the clutter may have been organized, minute particles of dirt and grime would have built up. In order for precise working of the tools and machinery, this dirt and grime must be removed. Seiso refers to a proper cleaning of the workplace, as opposed to the normal wipe-down which is usually done. Apart from this, organizations stress on this step being done by the workers themselves, as they are more likely to recognize any abnormality and understand it thoroughly.

4. Seiketsu (Standardize) – While the first three steps outline the work that needs to be done, the outcome is usually for a short term. This is where the fourth step comes in, wherein the actions of the previous three steps are carefully noted down as well as who did it. This creates a sort of standard operating procedure, which is then followed by other employees who may use the workplace next. Tools such as checklists, labels and signs for specific procedures as well as charts for job cycles aid in creating the SOP pertaining to that specific workplace.

5. Shitsuki (Sustain) – The final step of the 5S method is to build a continuing commitment to the workplace and to the decisions made during the 5S procedure. Support from management is vital, since an overview and feedback from workers should be acknowledged and implemented by the organization to better the overall output. While it is the last step, it is not the end as a whole. While performing the 5S once might reveal some issues, it takes multiple runs to actually rectify the issue. Thus, a continuing commitment ensures that the 5S is not just a one-time implementation technique, but a continuous mode of improvement.

Certain companies also add a sixth S, which stands for Safety. Unlike the other steps, Safety is not a sequential step in the 5S method. Rather, it must be integrated into every step of the method. The reason behind this is twofold – one, a safe workplace will be inviting to workers, since there will be less chances of an accident. And two, along with this, it will save the insurance and healthcare payments that the organization may have to cover for their workers as per the healthcare package they are providing. Not only does it cost the organization, but it is also a time-consuming process, where a lack of an employee might hinder the assembly line.

The 5S method benefits the organization in multiple ways. Getting things sorted out helps in a productive use of the time that would have been otherwise wasted for arranging stuff. This also leads to freeing up of space, which can then be used for a more useful application. Organizing and cleaning the workplace also leads to reduced injuries at work as the chances of any types of accidents are reduced. This also leads to an improved consistency in the productive work done by the employees, which increases the quality of the work done. All of these benefits combine to keep the overall morale of the workforce high, and thus increases their willingness to work effectively.

The 5S approach is not a ‘Done and Dusted’ idea. Rather, it is a continuing process that improves the processes. While it is not complicated, implementing the method can be a little diffcult as it requires proper communication. But with time, employees will gain the knowledge and eventually they will be comfortable with it.